Home > About....Knowing More > Neve Tzedek in Tel Aviv
Welcome to your source for designer Israeli Jewelry and Gifts. Buy and enjoy your chic and special jewels from the comfort of your home or mobile. Welcome to our new site: https://sterlingsilverjewel.com

Neve Tzedek (Oasis of Justice) is actually the first neighborhood of Tel Aviv. This neighborhood was founded in 1887 by Aharon Shlush, 22 years before Tel Aviv was founded. Shlush was a successful businessman who wanted to escape the crowded living quarters of Jaffa, and founded this neighborhood. Later, Neve tzedek was connected to Achuzat Bayit to form baby Tel Aviv. Many of the neighborhoods turn of the century houses can still be seen, and while the neighborhood has gone yuppie in the past years, it has retained much of its old charm.

You can still visit the Shlush house, which now houses art exhibits, and see the small synagogue that Shlush built to encourage Jews to leave Jaffa. Nearby is Shlush bridge which was built for Mr. Shlush after the old Jaffa-Jerusalem railway was constructed. This used to run in the canal under the bridge.

On Rochach st. (a 2 minute walk) you can see ‘Beit Hasofrim’ (house of writers) which housed many famous writers and is now the Nachum Gutman Museum. Nearby is the Rokach house, built for the Rokach family in 1887 by an Austrian architect, in a special European style including copper plated domes. The Rokach family have been prominent figures in Tel Aviv political life for over a century. Close by on Pines st. (pronounced penis) you can see the twin buildings built by Aharon Shlush for his two grandsons.

Neve Tzedek is undoubtedly one of the most beautiful areas in Tel Aviv.

South of the Yemenite Quarter, Neve Tzedek was the first neighborhood built in the “new” city of Tel Aviv, back in 1887. At the beginning of the 20th century Neve Tzedek was the home of many artists and writers, such as Brenner and Agnon (a Nobel Prize winning author).

But in the following years the area suffered from neglect, the old houses and streets crumbling away. Only in the 1980's, the place recaptured its former prestige, and has since become a stylish yuppie residence with plenty of restaurants, galleries and designer shops.

The architecture of Neve Tzedek is definitely one of the highlights in the area. Beautiful old houses restored to grandeur by modern architects and designers.

The Rokach House - One of the first houses in Neve Tzedek, which belonged to the well-known Rokach family. In the late 80's the house was restored by Lea Majaro Mintz, the granddaughter of the original owner.

The Suzzane Dellal Center – Tel Aviv's official dance center and home of the famous Bat-Sheva dance group. Besides offering excellent dance and theatre performances, there is a beautiful piazza and small gardens around the building. http://www.suzannedellal.org.il.

Chlouche House - This house was the first house built in Neve Tzedek in 1886 by Aharon Chlouche. The house was sold to an Israeli business man and has been operating since 2003 as an art gallery hosting temporary exhibitions. Israelis would say it gives them a "European sensation", with its high ceilings and 19th century look. You can stand on the roof top, which has a gorgeous view of Neve Tzedek, while enjoying a light breeze from the sea.

There are many gorgeous little shops in the area, especially on Shabazi Street. You can find designer shops, children's clothes, art, pottery and many more boutique shops, which would make even the most reserved shopping fan ecstatic. You can get a bite to eat in the many cafes and restaurants in the area.

Neve Tzedek may well be one of Tel Aviv’s oldest districts , but its still young at heart! Newe Tzedek or Neve Tsedek, as it is also known is another district of Tel Aviv which has become increasingly fashionable in recent years, as restoration works have taken place to restore it to its former glory.

Neve Tzedek was established in 1887, over 20 years before the City of Tel Aviv was created. Similarly though, it was created by a group of families seeking a peaceful life outside of overcrowded Jaffa. Desiring a more simple life, the new residents constructed colourful, low buildings along narrow streets with then-modern luxuries such as private bathrooms and toilets.

By the start of the 1900′s Neve Tzedek, had become an oasis for many artists and writers including future Nobel prize laureate Shmuel Yosef Agnon, and famous Hebrew artist Nahum Gutman.

As time went on, though, and the City of Tel Aviv developed, Neve Tzedek fell into decay. The North of the city, developed by the wealthier Ashkenazi (European Jews) attracted many of the richer residents of the south, and as they left, buildings began to fall into neglect. So much so, that by the 1960s, city officials deemed Neve Tzedek, which was now part of the city of Tel Aviv, a run down slum-like area, incompatible with the bustling North. They planned to demolish the neighborhood and construct high-rise apartment blocks. Thankfully, however, these plans never came to fruition, and as many buildings were placed on preservation lists, a new breath of life was breathed into Neve Tzedek as restoration works began in the 1980′s. The result has been that Neve Tzedek has grown into an oasis of tranquility in the bustling city, a real estate and cultural hotspot.

Visiting Neve Tzedek: Neve Tzedek is today a real oasis in the bustling city of Tel Aviv. The magnificent buildings are all individual, and a relaxing stroll through the neighborhood is a great way to spend some time. Shabazi Street is the main street through Neve Tzedek and, like many of the smaller side passages, is lined with with boutiques, galleries, and craft shops. The Suzanne Dellal Center is Tel Aviv’s dance center with a superb piazza and interesting gardens, whilst popular cafe Suzanna shouldn’t be missed.

Shops in Neve Tzedek are unique. The small, narrow streets are home to small unique boutiques, design shops and other fascinating shops which you could even think are not shops.

Restaurants and cafes in Neve Tzedek offer the full range of food that Tel Aviv has become known for. There is something magical about sitting out in the shaded courtyard of an Oriental style building with the sea breeze cooling you, enjoying a great light meal… 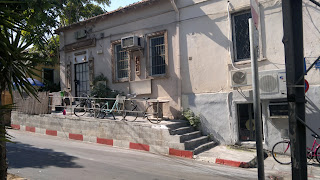